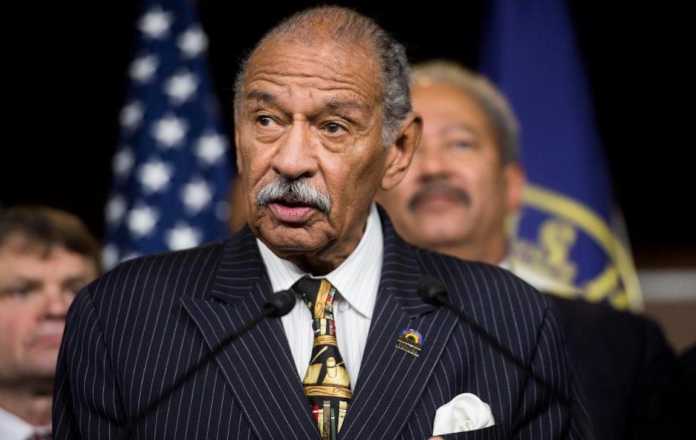 Conyers was the third-longest serving House member in U.S. history, just behind his predecessors John Dingle and John Dingle Jr., and the longest serving African American to ever hold the position. His purview included large parts of his home turf – Detroit’s west side and downriver.

Born and raised in Highland Park, Conyers
graduated Northwestern High School in the 1940s and served his country in
combat before he ever served in office. After stints in the Michigan National
Reserve and in the Army during the Korean War, Conyers hung his medals up and
pursued a college education at Wayne State University. He ran for Congress in
1965 and hit the ground running as an unapologetic champion for his community.

“I am more than saddened by the loss
of such a dear friend, colleague and political pioneer,” says
Congresswoman Brenda Lawrence. “John Conyers Jr. spent a lifetime in
public service, leading the charge on civil rights, social justice and equality
for people of color in America. His life and legacy will continue to impact
many generations to come.”

As far as Conyers was concerned,
liberal legislation was the only valid legislation. During his tenure as a
congressman he spoke up adamantly for the civil rights movement and was a
founding member of the Congressional Black Caucus. Martin Luther King Jr. Day
wouldn’t have been a federal holiday if not for Conyers; he was the one that
proposed the measure in a bill he submitted four days after the assassination
and fought for until it became law.

Conyers’ career wasn’t spotless. He
resigned his House seat in 2017 after sexual abuse and harassment allegations
began to pile up against him, as well as accusations that he had used public
funds to settle the cases. He maintained his innocence until his passing. While
the accusations are disheartening and disappointing, they don’t take away from
Conyers’ tireless legacy fighting for Detroit and her citizens.

Conyers worked closely with Rosa
Parks after she moved to Detroit. He helped impeach Nixon and sparred famously
with former President George W. Bush. He introduced the H.R.40 bill to examine
the legacy of slavery and reparations – and kept pushing it every time it
failed, every year, until his resignation. He marched against the spread of war
and global conflict, and took up a personal crusade against voter suppression.

Senator Gary Peters from Michigan
says, “Congressman Conyers dedicated his life to fighting for civil rights.
While serving in Congress with him, I saw firsthand his dedication and passion
for his beloved city of Detroit and the Congressional district he represented.”