Rising up from Detroit to bring the world new musical magic, she is the mystical, mesmerizing EXPERIENCE known as Monica Blaire

he performance space is stark black and silent.

Until she opens her mouth, and a cappella notes float like colorful reams of rich satin, caressing the senses and sweeping away the souls of those who sit enraptured by her song.

For a moment, her deep, sultry singing brings to mind legendary jazz divas.

But then she goes rock ’n’ roll, before engaging the audience in a hip hop version of the ABC song.

Then, seamlessly, her vocal chords dance up and down several octaves, from deep and sensuous to high and sassy, and you think, “Her voice is like a musical instrument.”

And, mesmerized by the silver shimmer of her pink scarf, black-feathered hat and liquid flow of her body to the beat, you realize, “This woman sounds like nothing and no one I’ve ever heard before.”

She is Monica Blaire, performer extraordinaire.

“She’s like otherworldly talented,” says Detroit spoken word poet Prostell Thomas III, 34, who watched Blaire perform at the Boll Family YMCA in downtown Detroit. “She sets the bar as far as performing and connecting with her audience. She brings you in like it’s just you and her in the room.”

He and his fiancée, Abigail Jones, 30, became fans of the 2010 Kresge Performing Arts Fellow when she performed at Art X Detroit at the Charles H. Wright Museum of African American History in April. The event showcased Kresge Fellows like Blaire who, after a competitive selection process, won $25,000 grants, professional development and opportunities to perform. Wearing an off-the-shoulder lavender flounce and leggings, Blaire electrified the packed auditorium with super sexy songs and moves accentuated by African dancers, belly dancers, drumming and audience sing-alongs.

“She’s very unique,” Jones says. “I like her style, her energy, her movement, her range of tone from low to high, and the way she dresses. I’ll definitely be looking for her to perform again.”

That sentiment is Blaire’s dream come true, but not for the reasons some performers seek the spotlight.

“I see myself as leading a movement about self-love and love in general,” Blaire says, nestling in silky pillows and sipping a tiny white cup of oolong tea on a carved wooden couch-bed at the very Zen Goldfish Tea in Royal Oak. “My goal as an artist is to help foster change by really encouraging people to embrace themselves wholeheartedly.”

Blaire, whose first album “Portraits of Me,” was released in 2006 by Silent Riot Entertainment, an independent record label in Detroit, says her refusal to conform to the cookie-cutter look and sound of contemporary R&B songstresses sets a powerful example to other women to be themselves in every way.

“People have told me, ‘J-Lo wouldn’t wear that.’ Or, ‘Beyoncé doesn’t do her hair like that.’ Or, you need to be skinny with long hair.’ And my response is, ‘This is Monica Blaire, and this is how Monica Blaire looks.’ I’m not supposed to conform because I’m an example of another option.”

That’s whimsically evident by the teal-green ringlet curl escaping her conductor’s cap that happens to obscure patches of purple and cobalt blue, as well as the shaved left side of her head. Her ’do exposes the circles tattooed behind her ear to represent her creative process: a dot ripples like a pebble in a pond to an infinitely bigger idea, a word, a sentence, a song, a performance.

“I do a lot of work with myself to be my most authentic self,” she says, with a piercing stare through tortoise-shell glasses. Her flawless complexion is cosmetic-free, in sharp contrast to the emerald green eye shadow or thick black eyeliner she wore during recent performances.

“My parents always made sure that I felt beautiful and confident that I could do and be anything,” she adds.

Being an artist and a performer is exactly what this 20-something graduate of Mercy High School has always wanted to be.

“I have a picture of her, when she was about 7-microphone in hand, sunglasses, a cute little dress and the socks above the ankle, patent leather shoes, and she’s singing,” declares her mother, Vera Smith, 59, assistant director of education and outreach for Community Arts Partnerships at the College for Creative Studies in Detroit. “The picture really reflects her idea about entertainment and singing. She had her arms stretched out, and she was entertaining her family. She’s been doing this a long time.”

Even when she was an infant, recalls her godmother, Detroit singing legend Ortheia Barnes: “I think she was 4 or 5 months old, and I was holding her on stage while I was singing at Somerset [mall]. She was grabbing the microphone to sing. Already taking charge of the stage, and she was a baby!”

After that, Barnes allowed Blaire to sing at her Detroit nightclub, Ortheia’s Place.

Also as a child, Blaire sang “My Girl” with The Temptations on stages around metro Detroit. Her father attended McMichael Junior High School in Detroit with group members Melvin Franklin and Richard Street.

“All of us would sing together,” says Blaire’s dad, 64-year-old Maurice White of Southfield. “They went on to become The Temptations and I went to college on a basketball scholarship.” He encouraged Blaire to pursue athletics, but also supported her passion for singing in the choir, writing poetry and composing songs.

The result? A unique fusion of musical genres.

“It’s profound how she’s evolved into her own unique voice,” says Barnes. “So many artists mimic other artists, but she stands alone. I call it Monica-sized. She has Monica-sized her own style of music. She’s in what I call the ‘new marketplace of ministry’-those young artists who say, ‘Here, I bring you love wherever you are.’”

Blaire says she learned that love at home, where her parents and grandparents nurtured her individuality and talent. After her parents divorced, she lived in eclectic places like a carriage house in Indian Village and an artist’s loft with her visual artist mother. And they lived with her maternal grandparents-her grandfather picked her up from school and made sure she finished her homework while her mother worked.

She also spent a lot of time with her father, who for 35 years was a sales executive with auto industry supplier 3M. She loved listening to his old school albums-groups like War and the Average White Band. Among the musical talents in the family is her great uncle, trumpeter Dave Bartholomew, who played with Fats Domino and is in the Rock and Roll Hall of Fame.

“When she was 3 or 4, she would sing popular songs, especially “Promise Me” by Luther Vandross,” recalls her mother, whose sketch of Monica Blaire’s profile adorns the home page of MonicaBlaire.com.

She always encouraged her daughter, whose birth name is Blaire Monica White, but was never a stage mother. Says Smith, “I wanted her to experience childhood, then make up her own mind about being a singer.”

And that she did.

“My mom raised me very intentionally to be a full-time artist, to always work for myself. So I started teaching African dance when I was 14.”

After studying vocal music at Wayne State University for 2 1/2 years, Blaire left school to focus on performing. She wrote the song “I Can Do Anything,” recorded by Detroit gospel singer Vanessa R. Williams. She made money by performing at bar mitzvahs and bat mitzvahs. Then she became the lead singer in a female rock band, Lola Valley, for a year.
Next she met Shaphan “Maestro” Williams from Silent Riot Entertainment.

“I wrote all 16 songs myself, then recorded “Portraits of Me” in 2 1/2 weeks,” she says. “The song ‘Breathe’ is the most meaningful. All that pent-up energy I had about wanting to be an artist, my way, came crashing down. It was really cathartic.”

As is her song “Rocket,” one of her current favorites to perform, which is all about having phenomenal life experiences. That happens every time Blaire gets on a stage, which she’s done at the Detroit Opera Theatre at the BravoBravo! 10th anniversary sold-out event, the Detroit Institute of Arts (several times, and once for 1,300 people), Chene Park (with Roy Ayers last summer), and venues in Atlanta, New Orleans, Chicago and Washington, D.C.

But her ascent hasn’t been without turbulence. Last fall, Blaire says she was overworked and exhausted, having promoted her album for four years.

“I completely withdrew,” she says, adding that her sunny upstairs flat in Ferndale became a sanctuary where she rested, read books like “Voluntary Simplicity” by Duane Elgin, and learned to fuel her body and soul with raw foods and yoga.

“I’m not eating totally raw,” she says, her eyes sparkling with revelation. “But it makes me feel so energized, so light, so peaceful.”

She also watched one of her favorite movies, “The Color Purple,” which she’s seen 40 times. “I love that it’s a collective of women who support each other. I long for that kind of energy. And it shows people’s true spirit is indomitable. You can’t stomp it out. The women are so strong, like, ‘I’m here, I’m breathing and I’m God’s child.’”

That spirit fuels her passion and purpose as an artist. She emerged from her respite, energized to go global.

“The Monica Blaire experience is all about expressing to people how special they truly are and how loving yourself is not only doing yourself a service, you’re helping the rest of us reflect that,” she says, nestling deeper into the silk pillows at Goldfish Tea. “It’s about healing, and coming to a safe place where people are comfortable being their authentic selves. That’s my gift to you, through my music.” 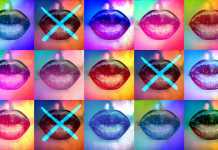 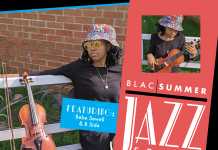 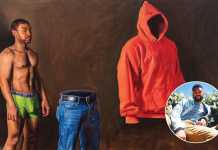