Home News + Features When Hope and Prayer Fail to Comfort, We May Need to Arm...

Amid increasing racial tension, maybe we should consider packing prayers – and heat. 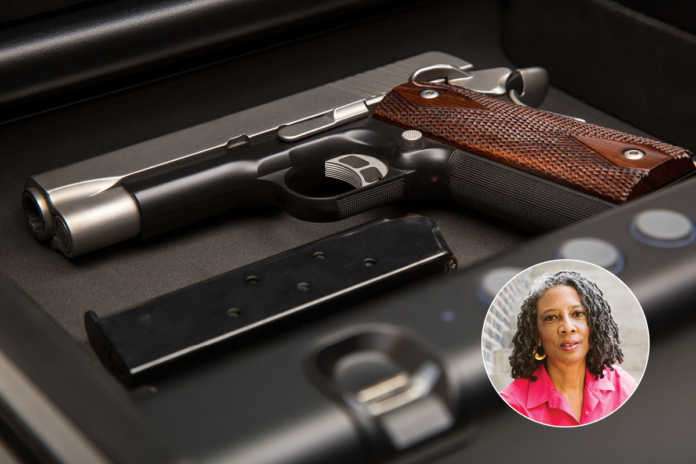 When I was about 10, my grandmother asked me to get something from her dresser. Pulling open the top drawer, I peeked into the luxurious mystery of womanhood: silky white slips, sturdy Playtex bras and delicate, sheer stockings. In the corner I spied a yellow King Edward Imperial cigar box and completely forgot my errand.

Opening the treasure chest, I expected to find her best costume jewelry or her cherished Avon perfumes. Inside was a pair of her finest white gloves with pearl buttons that she wore on first Sundays. Next to them were several embroidered handkerchiefs. And among those items of devout femininity lay a black, snub-nosed pistol.

Slamming the box closed, I fled from the room. But for years, that discovery haunted me. Evidently, there were threats out there for which my grandmother’s prayers were not enough. Fast forward several years. My best friend Karen and I were teens rummaging through her aunt’s attic looking for Christmas decorations. Suddenly, there was a rifle.

“Wow!” I said. “Check this out!” Before Karen could say anything, I had leveled the gun at her, put my finger on the trigger and pulled. When I heard that cold, metal click, Karen and I stared at each other in disbelief. I felt like vomiting; I’d expected the trigger to require more pressure. On that day more than 40 years ago, I could have killed my best friend.

These early experiences shaped my feelings about gun ownership. They taught me that even docile grandmothers have reasons to be armed. And they taught me that guns can be lethal to those they were meant to protect, so if you’re going to get one, it had better be for a good, church lady reason.

Now, I’m wondering if I’ve found that righteous reason. In this moment of astounding racial wokeness, Blacks are keenly aware that white backlash can be swift and violent. We remember that it was during Reconstruction when newly freed slaves were owning businesses and getting elected to office, that the popularity of the Ku Klux Klan surged and lynchings became the common tool of white terror.

Our fears are not imagined. According to a July Pew survey, 45% of Black adults say that it is more common for people to express racist views toward them since the coronavirus outbreak. For each vocal non-POC ally, there seems to be countless whites who are a hair trigger away from a racial war.

If the appearance of armed white men protesting in Lansing didn’t confirm my fears, then Jillian “Smith & Wesson” Wuestenberg definitely convinced me. She’s the Orion Township woman who pulled a gun on a Black woman and her daughter outside of a Chipotle last month.

“I am not a gun owner and don’t want to be,” says my justice warrior friend Desiree Ferguson, an attorney and lifelong Detroiter. “But I am considering it now, because I feel like I need to be.” When I ask Detroiter Julie Fields if her family owned a gun, she says, “We are about to! These people are arming for a war guided by the punk-in-chief squatting in the White House.”

Fields, who lives on the city’s west side, also says that as soon as the ink is dry on their license, they will be joining the National African American Gun Association, an organization that has more than 34,000 members in 75 chapters nationwide. In the 36 hours following the murder of George Floyd in Minneapolis on Memorial Day, NAAGA reported an influx of 2,000 new members.

“The current climate has me feeling like I need to have another tool in my toolbox to protect myself from these overzealous white privilege ‘advocates,’” says Toni Russell, an entrepreneur born and raised on the west side.

“Once my license arrives, I will be purchasing a shotgun for my home, a pistol for carrying and more classes and range time to improve my skills in handling both. I can continue to pray for change and be the example of the change I want to see. But I also must be able to protect myself as the evolution – or the revolution – of change is in progress.”

All of these women are also grandmothers. We have spent years hoping with our hearts and working with our hands to create a just world for our children and grandchildren. I haven’t decided what I’m going to do yet. But I’m reminded of the first lesson I learned about guns from my grandmother: There are times you must arm yourself with more than prayers.