So far, 2020 has delivered crucial lessons on patriotism, young people and hair care. 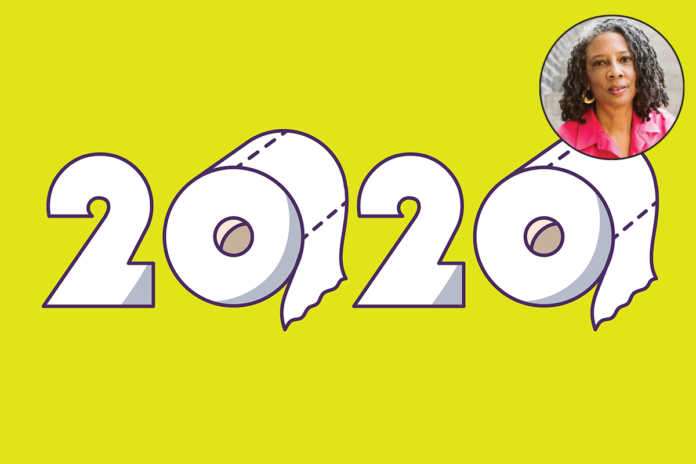 Zora Neale Hurston famously wrote, “There are years that ask questions, and years that answer them.” Well, 2020 is asking a lot, and it may take years to understand the answers. But in the meantime, here are a few of the lessons I’ve learned in the first half of the worst year ever.

Remarkably, even after months of quarantine, we still believe that if we don’t get our hair did, we will surely die. Even those of us with “natural” hairstyles now realize that natural hair requires several extra hands and more product than you can order from Amazon. Lawd, how did we manage for 400 years? Sure, salons are open now, but we’re not out of the woods yet, my people. If we are going to ever survive the apocalypse, we’ve got to figure out how to go back to our roots.

Patriotism is black and white.

Americans love to sing the national anthem. The problem is that for whites, “national anthem” means rockets red glaring and bombs bursting in air. For Blacks, it means lifting every voice and singing until Earth and heaven ring. Just a little difference in perspectives. The same goes for Independence Day, which celebrates freedom for white males from other white males. Juneteenth is Independence Day for the rest of us who got the freedom memo late, and have been pissed ever since.

But who knew he ever did? Y’all have passed by that Christopher Columbus bust on Jefferson a million times and never paused once to say, “Screw you.” Now, it’s too late. The rapist and pillager is stuffed in a storage bin where he will possibly stay for another 110 years.

On June 12 during Pride month, President Bunker Baby rolled back civil rights protections for transgender Americans. That was also the date of the Pulse nightclub massacre, when, four years ago, a gunman walked into a gay club in Orlando and killed 49 people and caused injury to 53 others. The Royal Covidiot then scheduled a death trap rally for June 19, commonly celebrated as Juneteenth (see above).

To add tone deafness to racism, he decided to hold it in Tulsa, Oklahoma, the site of the Tulsa race massacre, the worst racial attack in United States history. He moved that rally to June 20, because he loves the Blacks. But if all goes as planned, the Doughboy of Depravity will accept the Republican Party’s nomination on Aug. 27 in Jacksonville, Florida.

That’s the date in white history 60 years ago when a Klan mob used ax handles and baseball bats to beat Black demonstrators. Folks in Jacksonville still call it “Ax Handle Saturday.” The truth is that every day is the anniversary of another racist atrocity. Every. Damn. Day.

In the past, I have derided the urban gardening whenever it was heralded as the answer to Detroit’s economic woes. I think I said something like, “Farming is not the economic future for any city.” Well, now I’m eating crow until the veggies ripen in my backyard. If this summer has taught us anything, it’s that you’d better learn how to grow your own food and weave your own baskets.

It’s not hoarding if it may come in handy.

If I had a dollar for every time I’ve held a sturdy box, a cute plastic container or a strong shopping bag and said, “I might need this for my survival condo,” I’d have a billion dollars to add to the stash of quarters beneath my bed. All these years, I laughed at my mother saving tinfoil and Ziploc bags, now here I am, thinking, If I have to go off the grid, I’m going to need at least three manual can openers to last me a decade. Just remember, it’s not hoarding if you’re really going to need it.

Millennials are having their moment, and God bless them for it. For me, a millennial is anyone between 25 and 40, because they’re still young enough to get out of bed without groaning. Evidently, these whippersnappers have superpowers. Who knew? While we were complaining about their failure to launch, they’ve been accepting each other’s race, food, music, gender and sexual identities.

They’ve been meeting at the U.S. Social Forum, the Allied Media Conferences and in groups to address food insecurity, water rights and reproductive justice. They’ve been Afro-futurizing and, yes, even gentrifying, but more importantly, organizing. They didn’t come out of nowhere, my aged warriors – and, lucky for us, they’re not going anywhere.