I went to the annual Motor City Pride festival on Sunday and I had an absolute blast. Though, the absence of Neo-Nazi protestors on the second day was probably a big part of why.

My boyfriend and I went as enthusiastic allies – and
last-minute bodyguards for our friend Jane who planned to go alone and was
understandably nervous about it after the ignorant mess that went down Saturday.

I wasn’t able to get down there the day before, so I had to
learn about the white supremacy and anti-LGTBQ protest that occurred from a News
Week article on my dashboard. Apparently, “white nationalists” enjoyed a
police escort through the festival while they “made chimp noises and defaced
flags” to provoke Pride-goers.

We didn’t find any white supremacists to bathe in piña colada
on Sunday, fortunately. What we did find was hundreds on hundreds of people
being happy and trying, to the best of their ability, to enjoy who they are.

We missed the parade by the time we got to Hart Plaza around
noon. As soon as the morning drizzle dried up, the riverfront was packed with
people as colorful and diverse as the flags tied around their waists and
swinging from their shoulders.

“You don’t have to guess if anybody is not OK with you here,” Detroiter
Kat Dickenson told me, while we were both waiting for our frozen lemonades.
We’d started bonding over my envy of the two industrial piercings in her ears.
“It’s a chill, fun vibe.”

And it was. Everyone was welcome and everyone looked like they
were having a ball, for and with each other. We nibbled on elephant ears while
strolling the booths for free condoms, rainbow festival beads and merch from
local LGBTQ+ and allied vendors.

Yes, the condoms were flavored. Yes, we traded and compared
them like Pokémon cards and yes, I now have one that glows in the dark. Somehow,
we managed not to blow $30 each on impulse buys, although the “Too Gay to Drive
Straight” tank top almost got me.

Our little group was both surprised and pleased to see a
representative booth from Christ The King Catholic schools along the advocacy
and outreach lane, two stops down from LGBTQ+ newspaper Between the Lines and around the corner from where Planned
Parenthood and TeenHYPE educated Pride-goers about family planning and
reproductive rights.

It’s impossible not to learn a little at Pride, which is cool.
The variety of information and the even larger variety of people made me wonder
how intersectional everything was beneath the glitter and encouragement.

Different issues matter to different people and minority
members of the LGTBQ+ community often face higher stakes than their white
counterparts when it comes to the struggle of being accepted.

“I mean, black issues are always behind white ones, gay or
straight,” says Detroit native Samara Quick. “Black people are an afterthought.
The little (vendor and organization) tables are nice, though. They look like
they’re making an effort, so it’s encouraging.”

We stayed until the festivities ended at 7 p.m. I didn’t see
so much as one side-eye the entire time and we were all relieved that there
were no swastikas or Confederate flags in sight, not even when the drag shows
started in the Pride and Festival amphitheaters. Bands like The Crayfish
Hunters, and Laura Rain and the Caesars kept us rocking the whole
festival.

“We’re glad nobody was there that wanted to start anything too
crazy,” says Davion Saxton, another native Detroiter there with his boyfriend,
“and its good they didn’t come back. Goes to show you, we don’t want problems.
We just want to be ourselves and be proud and not be bothered.”

One more time for the people in the back: There was nothing alien
or other about the Pride experience, or
even really lewd or kinky. From what I saw, Pride is the result of an embattled
community giving themselves something to celebrate and a chance to claim their
identity around people that support them. 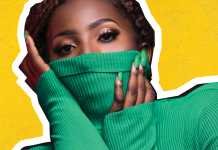 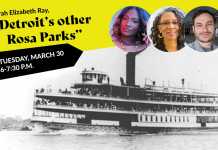