The exhibit running through September spotlights the unknown stars and behind-the-scenes champions of Negro League baseball. 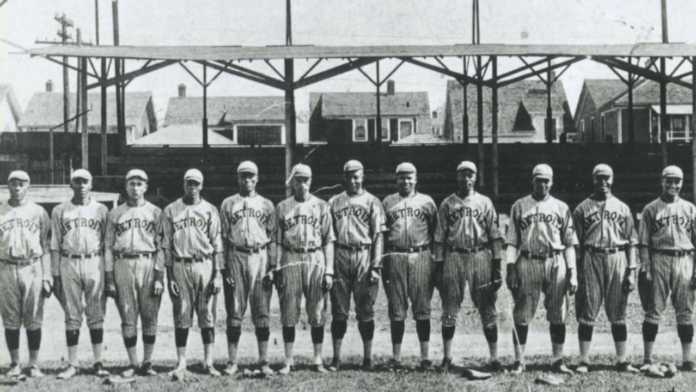 So, you know who Jackie Robinson is, as well you should. But there’s a good chance you’ve never heard of Norman “Turkey” Stearnes, and an even better chance you don’t know that he was an incredible outfielder for the Detroit Stars of the Negro Leagues in 1923.

Stearnes was rounding bases in the East-West All-Star Game and ducking fastballs while Jackie Robinson was in middle school. He’s one of the featured aspects of the new Detroit Stars & The NegroLeagues exhibit opening Saturday, June 15 in the Allesse Gallery of Culture at the Detroit Historical Museum.

“This year will be the 100thanniversary of the Detroit Stars team,” says Karen Samuels, vice chair of the museum’s Black Historic Sites Committee. “Compared to folks like Jackie Robinson, almost none of the people in the exhibit are well known. That’s the wrong we’re trying to right.”

The exhibit, organized by BHSC in partnership with the Friends of Historic Hamtramck Stadium, will feature “artifacts, memorabilia and a historic timeline of Black baseball in Detroit”. The front display is dedicated to the efforts and achievements of black women in the Negro Leagues, something unquestionably unique to DHS.

“We want to educate people about a time where America’s favorite pastime was an openly segregated sport,” says Samuels. “There’s a reason no one knows about (Negro League Stars). If you visit the Hamtramck stadium, the marker will tell you that it was one of the only remaining places where black teams could play.”

Samuels and her committee first started planning the exhibit in March of last year. Around the same time, she says the committee was also working on their expansive event series that runs through October and offers experiences like Belle Isle by Bus tours and black movie film screenings.

The exhibit is open through September and free to the public. Turkey’s daughters Joyce Stearnes Thompson and Rosilyn Stearnes Brown are scheduled to attend the reception in honor of their late father, who was considered, by some, to be one of the greatest all-around players in the history of baseball and who never received recognition for his talent.

In the 1920’s, Negro League players like Turkey Stearnes and his teammates worked in Detroit’s factories during the winters to support their income. The owner of the factories, incidentally, also owned the Tigers at the time. The Tigers would be an all-white team until 1958.

Samuels says that the exhibit is aimed at the younger audience. They want them to, “Chill on (Kevin Durant) and LeBron. Learn about Ozzie Virgil. Learn about your past. He was a Hall of Famer, got nearly 200 home runs! So much of our history is tied to that sport,” Samuels says. “There were black women that co-owned teams and teams that allowed women to play. We were excellent in baseball.”