Home News + Features Big Gretch is Not Your Friend, She’s Your Governor

A cool nickname and a pair of photoshopped “buffs” are not a governor make. 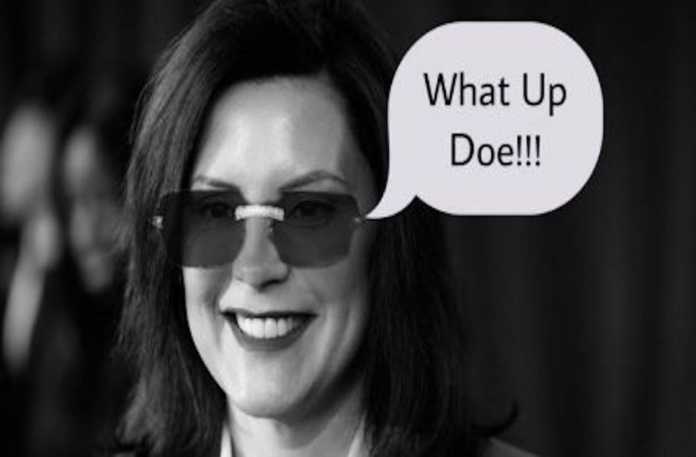 When I worked in the Detroit mayor’s office between 2017 and 2019, city government at the time had some breathing room – though not much – to experiment with new methods of municipal service that could not have been feasible just a few years prior, back when the city was bankrupt and barely hanging on by a thread.

New positions like mine were created, additional funding for new things – remember Spirit Plaza? – was reallocated, and people came to work with smiles on their faces because all the right numbers were trending upward. There was, by all accounts inside and outside city hall, a new energy at Coleman A. Young Municipal Center that was missing for quite some time, and everyone felt emboldened to try new things.

But there was one question a few of us were tasked with figuring out, and something we never could seem to get around to solving. How do we make Mike Duggan look cool? During my time there, the mayoral administration already had full plates with keeping streetlights on and garbage trucks running.

The problem was that millennial Detroiters were either skeptical of city government, not clued in to what changes city government had gone through in the last few years (the majority of them were here), or generally not at all engaged with city government like they should be.

A few of us would often brainstorm ways of making the mayor appeal to the youths, but without making it look obvious. What if the mayor popped up unannounced at Queens Bar? What if we had trivia night with the mayor? What if we just put him in more videos?

Some of that spitballing has manifested in various ways, such as the mayor’s sit-down with rapper Icewear Vezzo last year as part of an ongoing effort to raise awareness for the census. But at the end of the day, we realized every effort was futile. He’s the mayor. He shouldn’t be cool. He should be doing, well, whatever the mayor of a troubled city like Detroit should be doing.

Which brings me to another leading elected official in our fair state whose administration – I’m guessing – also faced the same question: Gov. Gretchen Whitmer. While we struggled to win cool points for Mayor Duggan, they were dropped into the governor’s lap after jokes and memes about a Cartier-rocking “Big Gretch” went viral with the very demographic we were trying to reach.

I’ll admit. I was a bit jealous of the Big Gretch brouhaha at first. I could have created a buffs-on-Duggan meme, I thought. But it would have landed with a thud. Here’s the real reason, though: We realized that an elected official’s job performance should be based on what we elected them to do. Elected officials are not our friends. They are our public servants.

Perhaps the geography between millennial Detroiters and a governor in Lansing – you can’t ride by the governor’s Moores River mansion like you can the Manoogian – is what allowed these jokes to fly at a distance. Or maybe it was Whitmer’s frequent clapbacks at President Trump – landing during increasing frustration toward the White House during this pandemic – that gained her the street cred.

Regardless, handing out Belle Isle cookout invites to Whitmer and treating her like one of our friends in the group chat lowers the bar for her long-term performance as governor. And it creates an inappropriate closeness between those we choose to elect and the constituents they’re charged with serving. You know that saying, “Don’t let them get too comfortable?” Well, y’all are letting Whitmer get too cozy. And we know what happens when they do: It backfires, and we catch the majority of the smoke.

I’ve watched on Twitter and other platforms as everyday folks and journalists, the latter of whom are supposed to be impartial in situations like these, pass around Big Gretch commentary without regard to any potential consequences. OK, I kinda did it, too, but the joke I made was funny to me. I’ve also watched as members of her administration retweeted and laughed right along.

I have no criticism for Whitmer’s handling of the state during the pandemic, and I’ll be the loudest cheerleader this side of the Mackinac Bridge to say she handled this far better than her opponent in the last election or her predecessor in Lansing would’ve.

What concerns me is that we, as not only Michiganders but as Detroiters who have always gotten the short end of the stick when it comes to dealing with legislators on the statewide level, are forgetting that Whitmer is a politician at risk of fault. And when they prove faulty, Black Michiganders too often have borne the brunt of the fallout. What happens if, God forbid, Whitmer lets y’all down?

Past governors have tried on personas to ingratiate them to outside-the-norm demographics, only to backfire. Gov. Jennifer Granholm attempt the very embodiment of cool when she introduced her “Cool Cities” initiative, an effort to keep young Michiganders in the state by promoting “cool” downtowns across the states, which seemed like a good idea at the time.

Cool Cities subsequently failed, but we tend to memorialize Granholm’s office as a calm, reasoned one with good intent. But even without the failure, most of us forget that Granholm’s office introduced drivers responsibility fees, which had disproportionate, years-long financial effects on Detroiters and other Michiganders of color. Gov. Rick Snyder tried a cool anti-cool by going the “One Tough Nerd” route and, well, I don’t have to go into what happened with him.

And here we are with Whitmer. No doubt comments among political chatterboxes about the governor being a folksy, matronly (I’ll save this for another commentary, but in short: I hate that a “mom” identity is weaponized against women in power, and I’m sure Gov. Whitmer would agree) Midwesterner who’d rather have a beer than to fight with a male opponent were getting to the administration. An unlikely debunking of that stereotype by trendsetters in the state’s largest – and Blackest – city couldn’t have come at a better time.

But it doesn’t matter if it’s fixing the damn roads or keeping people safe during an unforeseen pandemic, Gov. Whitmer is doing her job. It’s bare minimum. It’s what we elected her to do. You wouldn’t give the white woman supervisor at your job a pair of buffs because she gave you a raise. So why did we so easily give Whitmer those privileges?

And that’s before we even get into the fraught discussion of the violence often associated with Cartier frames, something no reporter, and, presumably, no one with the governor’s ear, has asked her about during this whole thing. I find it a bit problematic that Michigan’s leadership was actively engaging in the buffs conversation, considering that an ugly history of segregation intertwined with poverty and crime in Detroit, particularly, contributes to the violence around buffs.

There are ways to support our governor in her decisions around the state without letting her get too comfortable. You could start by obeying social distancing or staying your ass in the house like she said. With that same energy, there are ways to hold her accountable, because sooner or later Big Gretch is going to do something in the state’s best interest that Detroiters won’t like, and you’ll have to demand answers as a result. This is what we’re supposed to do. Your governor is not supposed to have buffs. Your governor is not supposed to be cool.

Aaron Foley is a journalist and author, was editor of BLAC Detroit from 2015 to 2017 and the City of Detroit’s first chief storyteller from 2017 to 2019. Argue with him on Twitter at @aaronkfoley.