The category is: Black, queer realness with an activist attitude. 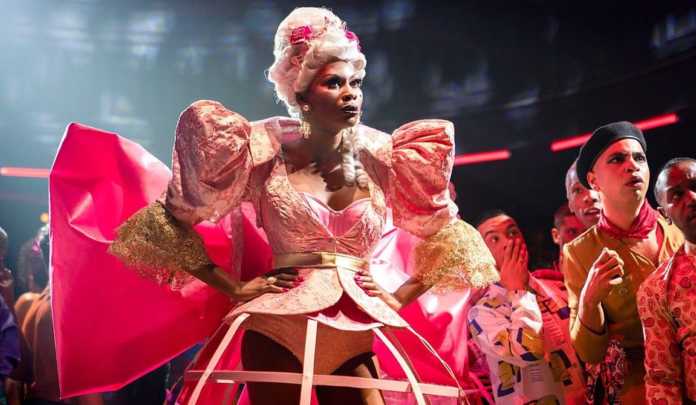 If you’re like me, you ditched cable years ago, and so when the second season of FX’s Pose dropped on Netflix on June 11, I runway walked to my couch and cued up the first episode (the first five, if I’m honest). When we catch up with the House of Evangelista, it’s 1990 and AIDS is continuing to ravage New York City’s gay and trans communities.

And while trying to fight a devastating disease that the majority still didn’t understand, they’re also fighting against inaccurate and homophobic messaging. The episode opens with Blanca (Mj Rodriguez) and Pray Tell (Billy Porter) traveling by boat to Hart Island in the Bronx to visit the burial site of Pray’s ex-boyfriend who died of pneumonia, his body unclaimed.

Hart Island is the United States’ largest mass grave and has been the final resting place for New York’s unclaimed and poor for over a century, and, in a very eerie example of art prophesizing life, is being used right now to lay to rest the bodies of COVID-19 victims.

In season 1, we learn that Blanca is HIV-positive, and in this first episode of season 2, her diagnosis is officially upped to AIDS as she fights her doctor on taking the only antiviral treatment available at the time, AZT, or azidothymidine, because of the intense side effects. And we see the gang crash Sunday Mass at a Catholic Church in protest against abstinence only preaching and the spread of misinformation about condoms.

They lie in the aisles as the parishioners try and drown out their chants of, “Stop killing us” with prayers of their own. Angel (Indya Moore) says, “Prayer won’t cure AIDS. Prayer won’t stop the spread of HIV; condoms will. Abstinence is not a human solution – it’s an erasure of our sexuality.”

But, there’s light. Maybe. Madonna’s “Vogue” is scaling the charts offering white suburbanites everywhere a peek inside ballroom culture, leading Blanca and some of the others to think that this will be the push that they’ve been waiting for. Perhaps, finally, they’ll be allowed to slink out from the shadows and enter the mainstream.

But as Pray Tell reminds, ballroom and voguing is not a trend or tourist attraction – it’s their life. And is the bridge and tunnel crowd actually interested in learning about Black gay and trans culture and welcoming it into their world, or are they just looking to extrapolate the pieces that look like fun while discarding the people behind “the scene”?

Oh, and Elektra is back and just as extra as ever, channeling Marie Antionette being served from a tray of amuse-bouche at the ball one moment, and flipping tables in her finery the next.